Every now and then a team comes along that is so talented, so balanced, so together, so very special that you hope the season never ends.  The 2019 Knights were that kind of team.  To be special requires talent in all the right positions, but of course talent isn't enough.  To be special you also need a totally committed roster of athletes that care more about the success of their teammates than they do of their own success.  Right from the very start, we knew this team had something special starting with summer play.  For the first time, we won the La Conner Tournament and a week later we took the Friendship Tournament, for the first time since 2014.  We played 23 matches in the summer against 17 different opponents from all classifications and didn’t lose to a high school team.  The Knights would take 40 of 49 sets played in the summer and and we never had a full roster.

The fall season got off to a great start as well with a strong win against the 2018 3A runner-up, Lakeside.  Two nights later the Knights toppled 4A skyline, muting their rowdy football team.  A little over a week later we came within an inch of winning the Sundome Festival.  2nd place is our best ever finish there.  Match play continued with win after win after win.  A big win at Eastside Catholic, coming back from a 2-1 deficit.  Perhaps as impressive were the not so big wins against opponents you're suppose to beat.  Those matches are often the hardest but this Knights team made it a mission not to fall below a standard of play, regardless of an opponent.  An undefeated regular season at 14-0 and only 2 sets lost, total.  Playoffs would bring much of the same with 3-0 sweeps of Sultan followed by Meridian.  A District Championship sweep of rival Lynden Christian followed by another 3-0 crushing of soon to be conference rival, Overlake would bring a Bi-District Championship and would mean the Knights would go to state undefeated for only the 3rd time in history.

State would bring a fair draw with an opening round match-up with Okanogan, and an easy 3-0 win.  The quarter-finals brought a familiar foe in Meridian who got past Castle Rock to face the Knights for the second time in two weeks.  Previously, King's faced Meridian in the District 1 Tournament at home in the Mike Martin Gym.  The result as State would be the same as before, another 3-0 sweep.  The two wins assured the Knights of a semi-final showdown with Lakeside, who we have faced in each of the last 3 years at State.  This year, Lakeside was #3 ranked and formidable.  The winner would play for a State Championship.  The match was tense with outstanding play from both teams.  The 3rd set would see the Knights comeback from a 24-20 deficit to win the set and the match!  Set scores were close. 25-18, 25-22, 27-25. With little time to celebrate, the stage was set, the Knights would play the Chelan Goats, once again, for the State Championship.

This was the 3rd time these two teams would play each other for the state title.  King's won in 2009 but Chelan returned the favor the following year.  Both teams this time were undefeated heading into the much anticipated match-up.  King's jumped out first with a hard-fought very close 1st set (27-25) and then followed that up with a convincing 2nd set win (25-16) to move to within a set of a state title.  Credit Chelan for bouncing back in the 3rd set to take a decisive 22-14 lead.  The Knight's caught fire behind Olivia Hjelle's amazing serves and Alli Hansen converting on offense to not only close the gap but take a 23-22 lead.  But the Goats showed great composure to side-out and score two consecutive points with the serve and claim the 3rd set, 25-22.  It was the first set dropped for the Knights since October 14th vs Eastside Catholic.  Fatigue emerged for the Knights early in the 4th set but credit to Chelan for catching fire and taking the set 25-21.  The 5th set for the State Title.  An incredible match was on display for everyone in the Sundome as the Knights jumped out first with a strong lead of 8-4.  Once again though the Goats would not go quietly, as they began chipping away to tie the game at 8-8 and then ultimately take the lead at 11-10.  the Knights would fight back and ultimately have match point at 15-14 but Chelan would sideout and score consecutive points and win the decisive set 17-15.

Not the outcome we wanted but the one we got.  21 wins and 1 loss would tie the 2008 and 2013 teams for best record ever.  This team had a goal to win state but their objective was much bigger.  To Light it Up on and off the court, to bring glory to God.  The 2019 Knights were all about lighting it up.  "Let your light shine before me men in such a way that they may see your good works, and glorify your Father who is in Heaven." Matthew 5:16

The Knights would be lead by Senior Setter, Ava Mason.  Ava's 3rd year on varsity would be her best as she was easily the best setter in the state, certainly for 1A.  Speaking of bests, Alli Hansen was healthy which meant the Knights had the best overall player in the state.  Alli's 4th year as a varsity starter would prove to be her best, dominating her way to 1A Washington State Coaches Association, Player of the Year honor.  Senior Katy Rettenmier would fill the other outside spot, adding power and leading the team in kills on multiple occasions.  The Knights would also feature two incredible middles with the junior tandem of Co-Captain Noelle Alberda and Annika Ruud.  Noelle was flat-out spectacular all season long, getting better and better, playing her best at the end.   Annika was also incredible, attacking a variety of balls from all spots and leading the team in blocks.  The Opposite position would be filled by Senior, Ellie Gaenz.  Ellie would provide both fire-power and great blocking against the opposing teams best hitters.  Emily Evanson would play incredible as as junior in the all important libero position.  Emily's balance of passing and defense, often at great personal physical sacrifice would bring awe from teammates, coaches and opponents.  The super-sophomore duo of Hannah Hawkins and Abby Nelson would play key starting back-row specialist roles including serving, passing and defense that allowed the Knights to be an incredible first-contact team.  Senior Olivia Hjelle would bless this team with her selflessness and general all-around game that allowed her to play nearly every position on the court. Junior Caitlin Ware would be a key serving substitute, coming off the bench to bring a tough high percentage serve. Finally, the selflessness of junior Maddie Kanzaki's willingness to play any role necessary was a key ingredient to this great team.

We won't soon forget the 2019 Knights who go down as one of if not the best teams we've ever had. In every respect.  The Senior class of Ava Mason, Katy Rettenmier, Olivia Hjelle, Ellie Gaenz and Alli Hansen are some of the best we've ever had and we honor their legacy of dedication, incredible work-ethic, selflessness and perseverance. 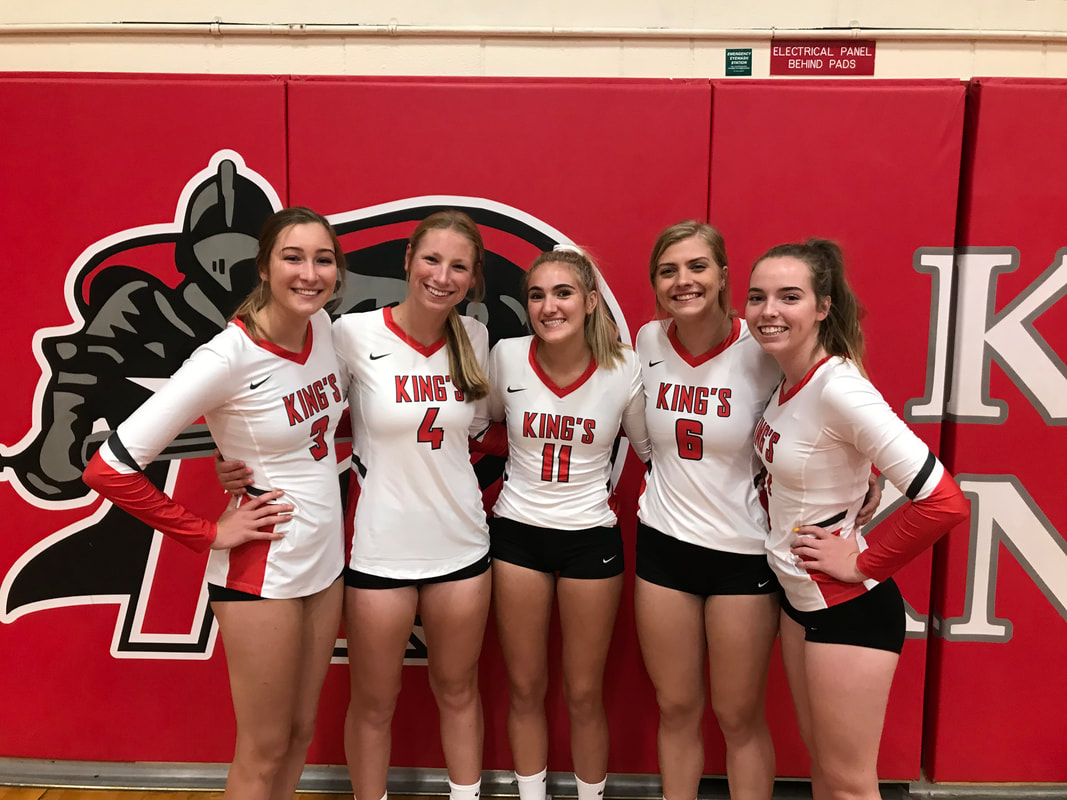