The 2018 Knights were full of talent but had to follow in the footsteps of the 2017 State Championship team.  Even though the 2018 team would return all 3 starting Outsides (Baily McCutchen, Dominique Kirton, Alli Hansen) and one Middle (Noelle Alberda), the girls understood early that the road back to a state title would be much more difficult than it was in 2017.  Going back-to-back is a far bigger challenge as you're not sneaking up on anyone and every team you play is fully prepared and jacked to play you.  Changes would include a new setter to run the show in junior, Ava Mason, a new middle in sophomore Annika Rudd and 2 new senior defensive specialists (Adair Rosenau and Anna Hochstein) to join seniors Zoe Graff and Ali Davenport. The roster rounded out with junior outside hitter, Katy Rettenmier, junior middle Olivia Hjelle and the summer surprise, transfer freshman setter, Hannah Hawkins. 13 girls, all of who could play and were eager to show it.  The changes didn't end with the roster but also with a new Head Coach as longtime assistant and current associate head coach, Bart Foley would take over with Jeff Fransen stepping down.  Foley would bring back 2014 alum and recent Northwest University graduate, Alysanne Stack (Van Dyke).  AVD brought her collegiate experience as a player, her knowledge of the program and coaching experience from her 3 years coaching at All Out Volleyball Club.

The road to state would bring more change in the formation of the new all 1A North Sound Conference.  The 6 team conference would mean 10 matches only and the need to find non-conference opponents.  The Knights would seek top quality teams to play non-conference which began with sweeps over 4A Skyline and 4A Redmond and a tough 3-1 loss to 4A North Creek which included some brilliant play and a good early glimpse of what this team could become.  The season would bring its first challenge at the annual Sundome tournament as 2017 1A MVP, Hansen would be seemingly lost for the year with a back injury.  The loss would turn out to galvanize the team as Rettenmier would be called upon to start on the right-side with Kirton moving over to join McCutchen on the left-side.  With Adair Rosenau emerging as the libero the lineup was now set and the goals and objectives remained the same.  The first test would come from the all classifications, Linda Sheridan Classic, know mostly as "the Spokane Tournament."  The Knights would show no signs of let down with the loss of Hansen, cruising to a 1st place finish in pool play and two big wins in bracket play, setting up a semi-final showdown with 1A rival, Chelan.  The last time the Knights faced Chelan was in the 2010 state final loss.  A showdown with the Goats offered a possible preview of the 2018 state final.  Unfortunately it wasn't to be as Chelan would win it in 3 but the Knights felt great about their day and ultimately a new found belief that despite the new lineup, expectations could be as high as ever for a special season.

Another big non-conference win, a resounding sweep over 3A power and 2017 state runner-up Mercer Island opened up October and the remainder of conference play followed.  The Knights would breeze to a North Sound Conference Championship, going 10-0 in conference play with only 2 dropped sets on the year.  Post-Season would open up with the District Tournament and two easy wins which set-up a big District Championship match at longtime rival, Lynden Christian.  The match would also coincide with the unexpected return of Alli Hansen who would don the libero jersey for the first time.  With Hansen's passing and defense, along with an epic performance from setter, Ava Mason, and incredible serving and defense off the bench from senior, Anna Hochstein, the Knights would win the first set but drop sets two and three before mounting a 4th set comeback that pushed the match to a decisive 5th set.  With strong performances from our senior co-captain outside hitter duo of McCutchen and Kirton, King's would jump out early in the 5th set but the Lyncs would not go easily.  After all the tide of the rivalry had turned very much in the favor of LC who had won 5 of the previous 6 matchups.  But the Knights would not be denied, winning the set 15-11 and the match 3-2.  With an easy win over the District 2 champ Overlake a week later, King's would go to state as Conference, District and Bi-District champions.

With trophy in hand, the Knights would return to Yakima feeling strong but reserved about our chances.  Just prior to our departure, Alli Hansen's story would continue to evolve as she was now pronounced cleared to play back and front row.  Not ideal to shake things up at this point but with Hansen now cleared to swing, the Knights were able to field the lineup featuring all 3 hitters from the state title team of 2017.  The draw was unfortunate again but what else would a Knight fan expect?  Another gauntlet of sorts.  Lakeside again in the first round which proved not as formidable as a year prior but a strong team with nothing to lose as their star setter and UW recruit, was lost for the season.  King's would once again end Lakeside's season with a straight-set sweep and would then face an undefeated La Salle team with a very tall front line.  La Salle would come out swinging and blocking to take a commanding 9-2 lead early.  The Knights would tap into their experience to remain composed to mount the comeback necessary and take set 1.  La Salle would jump out again though in set 2, this time with an 11-2 lead which ultimately took the set.  The Knights would were too talented though to lose to this team, taking set 3 25-18 and set 4 25-20.  The win allowed the Knights to make it to the final day of the season.  The annual countdown was set this year to the final possible day of the season which meant the only way to get there would be in the final four.

The matchup would be with a surprising Charles Wright Academy team that slipped under the radar all year from District 3.  Turns out Charles Wright had a nice team that featured the best overall player in the field, University of Houston commit, Abbie Jackson.  Still, the Knights were the deeper team with better overall talent.  But one strong hitter that can kill the ball from all 6 rotations can take a 1A team a long long way.  The semi-final match vs CWA would prove to be a battle, going 5 sets with the Knights losing set 1 25-22 only to bounce back with a commanding 25-13 win in set 2, followed by a 25-20 set 3 win.  Unfortunately the Knights couldn't close it out with at least one match point in set 4 but a 26-24 loss would set up the dramatic 5th set.  Unfortunately it wasn't to be as CWA would win the 5th, 15-13 and advance to the finals which meant the Knights wouldn't go back-to-back but instead play for 3rd place.  The raw emotion of falling short of winning it again would prove more formidable than the Granger squad on the other side of the net.  King's would take 3rd place with a 4-set win and conclude an amazing season.  While the 3rd place finish would feel awful, the Knights would come to celebrate the 2018 season.  The objective from the outset was never to win a state title but rather commit to the process of becoming the very best they could be.  From that standpoint, the 2018 King's Knights would become champions and go down as one of the best teams in program history.

We bid farewell in 2018 to six amazing girls.  Our graduating seniors are celebrated for the incredible commitment and sacrifices that set an example for all that follow. Six girls all uniquely gifted and each one amazing to be around and so influential on our success.  Most importantly, they have blessed the entire program, their teammates and coaches with their wonderful personalities and commitment to the sport and the team.  Nothing but love and gratitude for these seniors.  Especially grateful for the incredible leadership of our co-captains, Baily McCutchen and Dominique Kirton.  Their experience and selflessness leave a high-bar for those who will follow. Thank you Anna Hochstein, Adair Rosenau, Zoe Graff, Ali Davenport, Dominique Kirton and Baily McCutchen.  You will be missed but never forgotten. 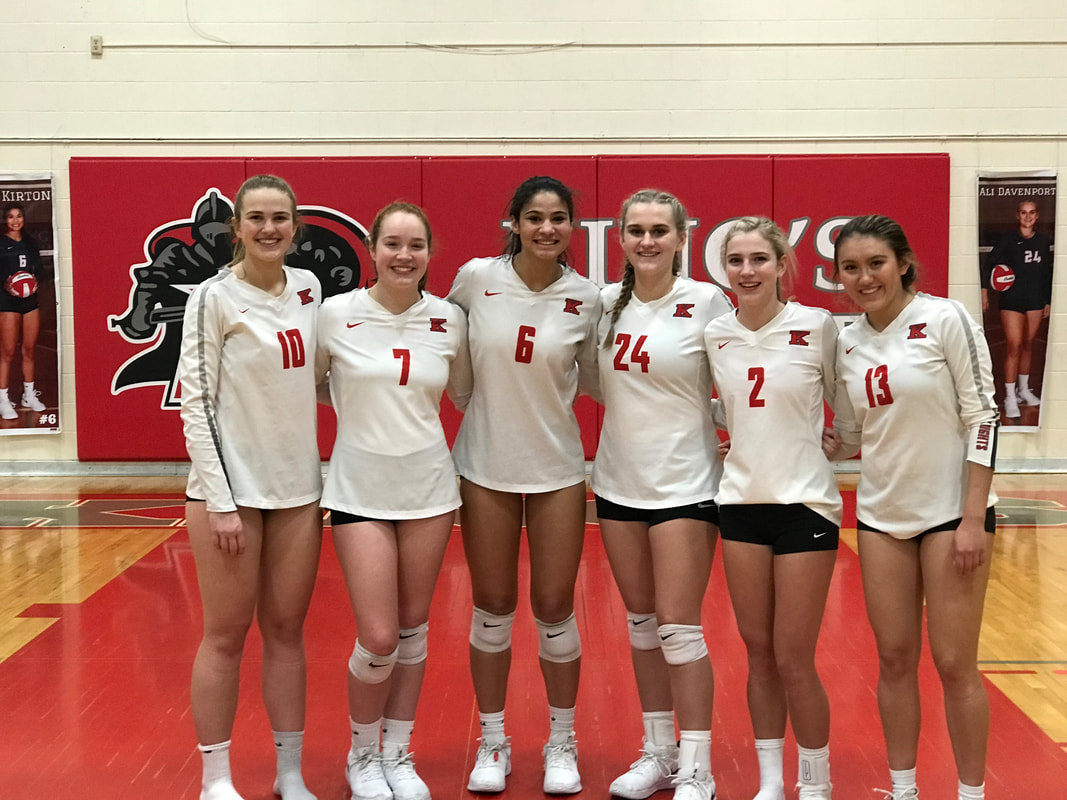