For some they arrived at King's very recently, unaware of any history or volleyball legacy.  Certainly they had no idea when the last state title was won.  For others the details of past KING'S VOLLEYBALL success is firmly etched in their minds as they not only have heard various stories and accounts of magic memories, but several were actually present for much of it and a few even had older sisters in it.  For all, the program's high standards would become firmly grasped as spring and summer volleyball's intensity would once again provide a foundation of not only how things are done, but why.  When a program builds upon itself year after year, you sometimes forget the "why" because it simply "is" what happens.

2017 was one for the annals.  The team with promise would show early signs of potential followed by struggles when the heat turned on and ultimately, sweet redemption.  Redemption for a program that would be humbled in 2016 by missing state for the first time in 12 years.  From missing it one year to winning it the next.  The story of the 2017 Knights was not simply what happened but how it happened.

Early on their was promise as returning senior, Sydney Jones demonstrated big year to year improvement.  Jones would be joined in the middle by incoming freshman, Noelle Alberda.  Alberda would be the 3rd consecutive freshman to make varsity following in the footsteps of Baily McCutchen and Alli Hansen.  Prior to that only 3 others had made varsity in program history.  The emergence of Jones and Alberda would allow returning middles, Hansen and Kirton to move from middle to the pins.  Hansen would join McCutchen on the left-side while Kirton would move to the right-side.  Returning DS and senior co-captain Elle Mason would don the libero jersey for the first time, while returning senior co-captain, Tessa Foley would take over as floor leader and setter for the first time.  Talented but inexperienced were the 2017 Knights.  Conventional wisdom  would suggest experience was needed for post-season success.  These Knights would feature only 1 player (Mason) that had played at State.

The season got off to a great start with non-conference wins over top programs, in Edmonds Woodway and Holy Names.  Conference play started the same with wins over Cedarcrest and Sultan.  A Silver championship at the Sundome tournament was next, with the lone loss coming to 4A power West Valley of Yakima.  The Knights would enter the first of the two annual rivalry matches with Archbishop Murphy feeling confident.  Archbishop had graduated key contributors that helped the Wildcats with their first ever series sweep over the Knights the prior year.  The match at home did not go as planned as the inexperience would be exposed in a 3-0 pounding.  The loss would reveal a signature personality trait of the 2017 Knights that would prove pivotal; an ability to learn from mistakes.  The game is full of failure but it can't define you.  The girls would be fueled by signature losses with bounce-back victories over Archbishop in the final showdown, a 5-set thriller at ATM, a win over Lakeside to open up play at state, defending a previous loss in Spokane, and key bounce-back win in the State semis over district rival, Lynden Christian after being swept at home 2-weeks prior in the District Title game.  Still, the loss to Lynden Christian would mean once again, King's would face a loser-out, winner-to-state match as they did in 2016.  This time, the Knights would prevail, sweeping Meridian to earn the return to state.

Even with a healthy mindset as we arrived into Yakima, we were reminded at every turn by fellow coaches that our draw was brutal.  Apologies greeted us by many who saw our draw as a heavy half-bracket gauntlet that would eat up even the best of teams.  After all, the opener pitted our #4 ranked Knights vs the #1 ranked and defending champions, the unbeaten Lakeside (9 Mile Falls).  IF you can survive that, you'll most likely face another unbeaten, #5 Castle Rock.  Win that, and most likely you'll rematch vs Lynden Christian who is #3 ranked with 3 straight appearances in the state final match and just beat you in the District Championship, on your own court!  If you somehow survive all of that, you will in all likelihood see the #2 ranked Cascade Kodiaks who would have eased on into the final match in a very soft half of the bracket.

The young King's squad would adapt well to the role of underdog as the Knights came out swinging vs Lakeside.  In a thrilling and dominant fashion, King's would sweep Lakeside 3-0 to advance.  "Survive and advance" became the mantra as King's faced the next challenge in unbeaten and 5th ranked, Castle Rock.  The Knights would again sweep its way (3-0) straight to the semi-finals and a rematch vs #3 ranked, Lynden Christian.  With the opportunity to play for the title hanging in the balance, the Knights faced-off against a Lyncs team that had won the past 5 matchups and 2 of the past 3 state titles.  King's would once again come out strong with a 1st set win 25-22.  The experienced Lyncs showed great poise to bounce-back and capture a hard-fought 2nd set, 29-27.  Tied-up at 1-1 in the best of 5 semi-final, the Knights would seize the momentum again with a convincing 25-17 3rd set win.  The 4th set was back-and-forth all they way until the Knights pulled away to win it 25-22!  The celebration would have to be brief as the Knights would play for a State title in under 2 hours against #2 ranked and heavily favored, Cascade of Leavenworth.

Senior co-captains Elle Mason and Tessa Foley would lead the way for the Knights. Key contributions from the junior hitter tandem of Baily McCutchen and Dominique Kirton provided balance to the fire-power and all-around dominance of sophomore phenom, Alli Hansen.  Strength in the middle from senior, Sydney Jones and freshman, Noelle Alberda were key as were the contributions of junior, Zoe Graff.  Ali Davenport would provide serving dependability off the bench, including our final points.

​Accollades followed including the state tournament and WIAA 1A MVP to Alli Hansen.  First team all-state honors went to Elle Mason, Dominique Kirton and Tessa Foley.  Foley would take the Conference MVP honor as both Hansen and Mason would earn 1st team.  Baily McCutchen and Sydney Jones were named 2nd team all conference while Nicole Alberda received honorable mention.  Foley also made the Everett Herald All Area team.  Finally coach Fransen was named the WIAA 1A Coach of the Year, earning the same honor in the Cascade Conference.

We bid farewell to our seniors who made such an impact on the program and leave an enduring legacy for those that follow. Thank you Alexis Graham, Elle Mason, Sadee Marshall-Inman, Sydney Jones and Tessa Foley. 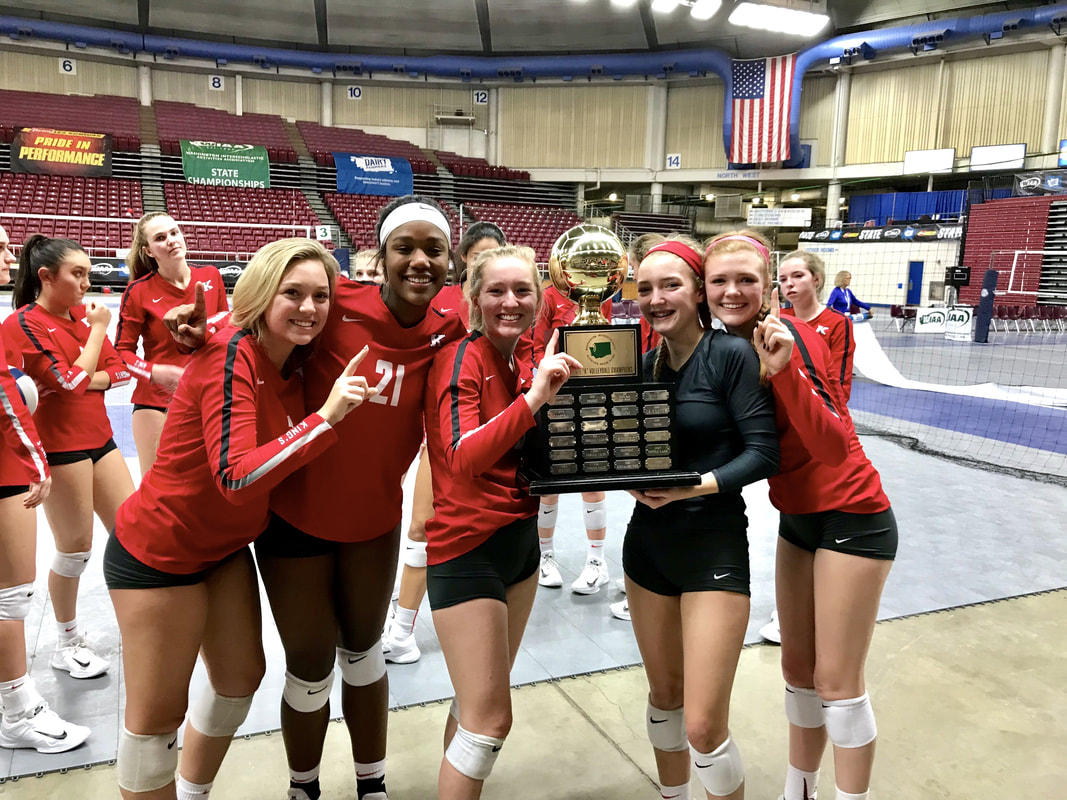