After graduating 5 key seniors from 2015, there were more question marks than unkowns. We had a returning setter and leader, in senior Casey Kispert and fellow senior Marlee Young would provide continuity at outside hitter but the rest was up in the air.  Of course we knew we would have key position battles which would make things interesting.  Returning senior libero, Anna Hoff would be tested by junior Elle Mason.  Baily McCutchen seemed poised to fill in one of the outside hitter roles while fellow sophomore Dominique Kirton was a candidate as well as junior Alexis Graham.  Middle was undoubtedly the biggest question mark as we graduated both starting middles.  Both middle positions would have to be filled by inexperienced players which meant, 2016 was likely...a rebuilding year.  So we thought.

Spring practices would bring promise but not many answers.  Competition was the theme and right out of the gates we were impressed by the talent.  Inexperienced but talented nonetheless.  McCutchen and Mason seemed ready to battle but seniors, Hoff and Young were up for the challenge.  Junior Setter, Tessa Foley would also bring a competitive fire that made nearly every single position a challenge.  Middle was still very unclear.  JV players, Eva Cobb and Sydney Jones looked ready to play on varsity but the Friendship Tournament would reveal our likely Middle 1.  Freshman, Alli Hansen burst onto the scene at the Friendship Tournament bringing a fire and talent which turned heads.  Hansen's raw umbridled abilities changed the perspective on our 2016 possibilities and middle went from a perceived weakness to a sudden strength.

The 2016 tryouts solidified our lineup with returning senior DS, Megan Payne back to fill a much needed role and the roster was set.  Over the course of the first 2 weeks, a lineup with Hansen and Kirton in the middle emerged with Young and McCutchen on the left-pin, Hoff at Libero and Kispert running the show.  Right-side needed more time to settle as Graham, along with juniors Sydney Jones and Eva Cobb would have opportunities.  The position never truly solidified but Jones' defensive capabilities earned her the most time as our District 1 foes boasted some of the top outside hitters in the state and a big block would be critical.

The Knights would provide glimpses of hope with a contention-worthy performance at the annual all classifications Sundome tournament.  A pool-play sweep advanced the Knights to the top bracket and there waiting was long-time rival and defending State Champions, Lynden Christian.  Although LC graduated their best player in program history in UW recruit, Kara Bajema, the Lyncs had a championship mindset and dispatched the young Knights 2-0.  The Cascade Conference had never been more talented with long-time rival, Archbishop Murphy leading the way.  ATM had the full package in 2016 with two strong outside hitters and nice complimentary pieces at every position.  The Hayward sisters, Sam and Natalie would not be denied in the first round matchup at ATM, sweeping the Knights 3-0.  Cedar Park Christian also returned talent and experience in 2016.  They too had their best player in program history back for her senior run in Maryland-bound, Sam Dreschel.  The Eagles were also state runner-up the prior year.  The first match-up proved to be another great baramoter check for the Knights.  In a move that seemingly made both players and the team better, McCutchen and Young switched from O1-O2 and suddenly, the Knights found a spark in front of a great home crowd, cruising to a 3-1 win.

The annual Spokane tournament provided more evidence that this young squad was gaining much needed experience and could compete with anyone.  The Knights again won their pool advancing to the Platinum bracket, something only one other King's team has acheived before.  Although the Knights lost to 4A power Mead in the first playoff match, a signature win to close the day over 1A Lakeside of Nine Mile Falls would make for a very succesful day.  Mead would go on to the final match of the 4A State Tournament, losing to Auburn Riverside while Lakeside of Nine Mile Falls would end up winning the 1A State tournament.

Post-Season play would get off to a great start with a win in front of the home crowd over conference foe, South Whidbey that settled inexperienced nerves and raised hopes.  The win was an impressive 3rd of the season against the Falcons and meant the District Title would go to either the Knights, or LC.  The LC gym was a great atmosphere and the Knghts started hot but fizzled. The inability to capitalize on the first set opportunity proved fatal and LC won 3-0.  Cedar Park lost in a surprising District 5-set stunner to South Whidbey, which set-up a crazy loser-out between King's and CPC at the Bi-District tournament.  In front of a home crowd with everything on the line, the Knights couldn't get it done, losing in straight sets and the streak of 12 straight state tournament appearances was snapped.

​The harsh sting is brutal but eventually time heals all wounds and the 2016 Knights will come to appreciate that it's ultimately not about wins and losses but about committing to be your best and selflessly putting aside individual wants for the collective team needs.  The experience is about the journey, not the destination. 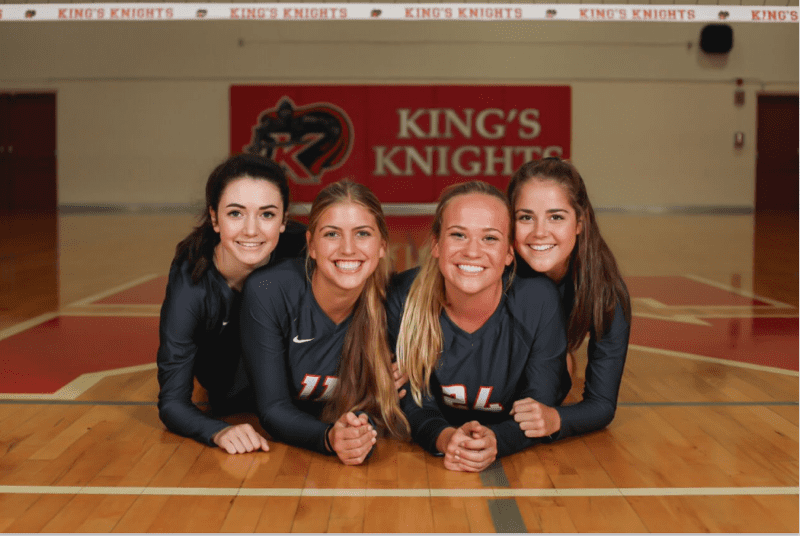