The 2013 team was full of promise heading into the season. With bright young stars at each key position, the Knights were poised to make another run at a state title. But graduating 16 girls over the past two years is a huge challenge. 16 girls who took with them a ton of institutional knowledge about how we do things. Alysanne Van Dyke would return as co-captain and our lead Outside Hitter. AVD would be joined by sophomore, Daylee Hanson. Junior, Savannah Hanson would join Senior, Whitney Naber in the middle while sophomore, Sydney Gaenz would begin her 3-year run as Opposite. The Libero position would be somewhat of a concern after graduating a trio of talented liberos in McKenzie Daniels, McKenzie Mitchell and Jeanna Berg, it would take nearly the entirety of the season with Pauli LaSorella and freshmen, Anna Hoff seeing time. Ultimately we would settle on junior Hannah Green. Green had an injury plagued season as the outside hitter would come back from a broken leg to dawn the libero-jersey just in time for post-season.

Still the Knights rolled through conference, district and tri-district titles all the way back to state, undefeated and a #1 ranking en route to the Sundome. Expectations were high when the draw was announced and a talented Freeman squad would be first up.

Freeman proved more than worthy in the opening round at state. A talented team that backed their way into state with seemingly nothing to lose in a tough first round draw against King's. A see-saw, 5-set thriller would come down to the wire and while a blown call doesn't cost you a match, it certainly doesn't help you win one. In particular when it occurs at 13-13 in the 5th set. A Freeman ball that was clearly served out by as many as 6-8" was called in. Before an explanation or an argument could be heard by coaches or captains, the next serve was beckoned...an ace and suddenly it was match point. The ensuing timeout did nothing to stave off momentum and elimination from a state title. The Knights were upset in the first round. Once again, huge disappointment would turn to a different challenge. The Knights would have to play again, in a few short hours, a character test. The Knights would proudly find the resolve to win their remaining 3 matches and place 7th overall. Not the finish we had in mind but ultimately, one we could take pride in. 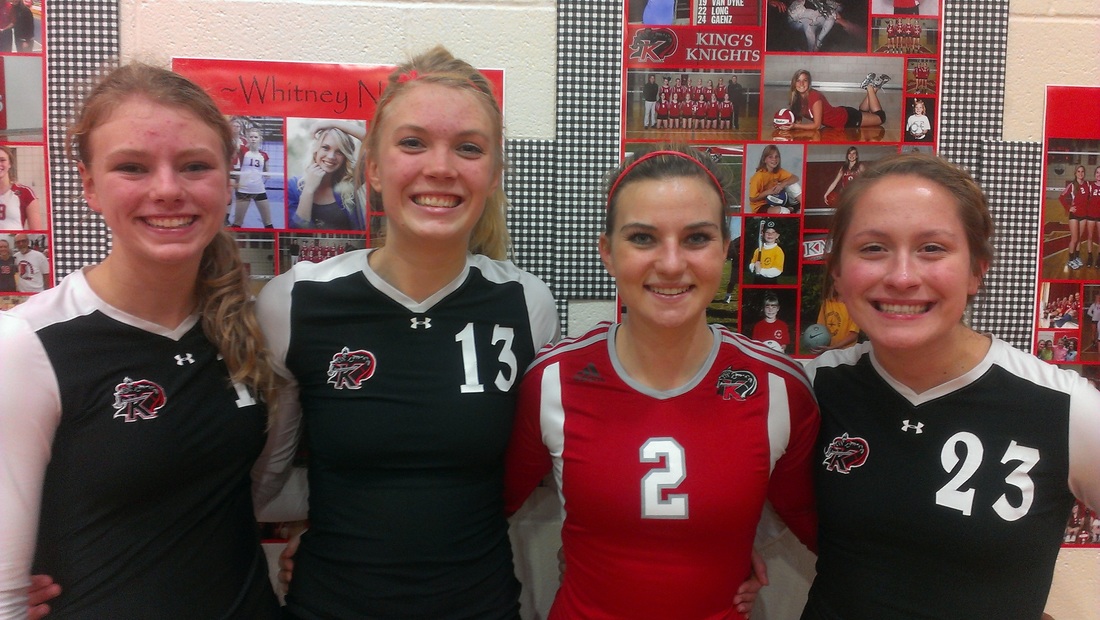