The 2008 team accomplished something that can never be repeated as they won King's its first ever State Championship in volleyball. The roots of the 2008 title can be traced back to the teams that preceded it, most notably the 2007 team. The 2007 team is arguably the best King's team to not win a title as the starting lineup boasted 6x future collegiate players, including 3x that would go on to play at the NCAA Division 1 level. That 2007 team would lose an epic 5-state semi-final battle vs Colfax that would end its title hopes.

On paper the 2008 team wasn't suppose to be as good as 2007. When you lose Bianca Rowland, Kailey Trauttman and Erin Bremond, expectations are lowered. But somebody forgot to tell the 2008 team as they would cruise through the Cascade Conference with ease, capture the Gold Championship at the Spokane Crossover and not lose a single set in conference play heading into their final match at Archbishop Murphy. Then things got interesting...

Archbishop would celebrate their seniors in a packed gym with a long ceremony that somehow managed to energize the Wildcats but hypnotize the Knights who would lose 0-3 and suddenly begin to question everything about who they were and what they could accomplish heading into post-season. That signature loss would end up proving to be the best thing that could have happened as the Knights snapped right back by crushing Lynden Christian, Cedar Park and Annie Wright en route to a return to state and a chance to avenge 2007.

Experience at State would prove to be huge as the Senior core of Laura Friar (OH), Rosy Boggs (OPP), Joran Irish (MB), Meagan Foote (L) and Ann Peters (DS) would draw on their collective experience to lead a very talented group that also included junior and WIAA 1A State MVP Anna Cesari (S), Dionna Kirton (OH) and Jennifer Dame (MB). The Knights experienced a quarter-final scare vs Cascade of Leavenworth, dropping the first set against a very talented Bears team that boasted two collegiate players. The Knights responded by taking the next 3 straight and then cruised past Annie Wright with a 3-0 sweep. The Final match was thrilling with lights dimmed and intro music blaring. Both King's and Castle Rock enjoyed the exclusive spotlight as the only match in action in the Sundome. King's would strike first taking the first two sets, but would drop set 3. The girls took the huddle before taking the court for set 4, "we are winning this game!" was their promise to one another, and the rest is history.

​King's captured it's first state tile with a 3-1 win over Castle Rock.
​ 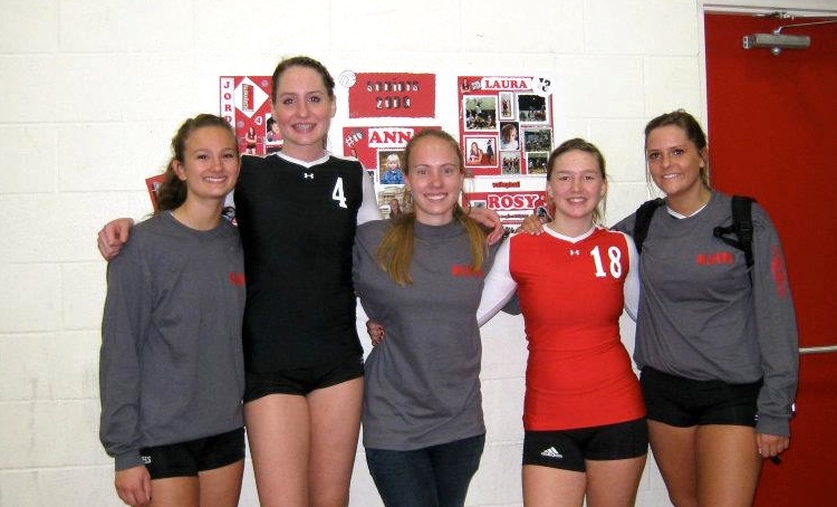