The debate for the best team in program history not to win a title, is arguably between the teams from 2011 and 2007. Although a separate case for the best in program history can also be made for the 2007 team. No team in school history turned more heads and produced more collegiate players than the 2007 group. Outside Hitter and WIAA 1A MVP, Kailey Trauttmann would go on to play at D-2 NNU. Bianca Rowland would have the most decorated collegiate career than any other KHSVB alum, at the University of Washington, where she made several NCAA Tournament appearances, earning All American honors along the way. Starting Middle Blocker, Jordan Irish would earn a D-1 scholarship to the University of San Francisco. Senior MB Erin Bremond would have a fantastic career at D-3 power, PLU. Junior Opposite Laura Friar would also play collegiately at a number of different stops, concluding with NAIA power, Southern Oregon University. Sophomore Setter, Anna Cesari would go on to reunite with Rowland at UW a couple years later. Quite an achievement for a little 1A program.

By 2007, Coach Bain was getting his sea-legs. After consecutive semi-final losses, his Knights were ready to break-through in the 1A field and the 2007 team would provide that opportunity. The state would be put on notice early, as the Knights would take 1st in the annual Sundome Classic. The Knights would also destroy each team in the Cascade Conference with the exception of rival, Archbishop Murphy. With Rowland sidelined nursing an injury, the Knights and Wildcats would battle it out in 5-set sweaty-gym showdowns at both places. The 2nd matchup featured an amazing comeback in the 5th set, down 3-9, the Knights would side-out causing ATM to call a somewhat perplexing timeout, considering King's had no remaining timeouts. Coach Bain's classic line, "alright, we have them right where we want 'em," would prove prophetic as Cesari would go back to serve 11 straight points to ensure the Knights would take 1st in the 1A/2A mixed conference. The Knights would also place higher than any King's team in history (3rd overall) at the always tough, all classifications, Spokane Crossover tournament.

After District and Bi-District championships, the Knights would enter state with only 5 sets dropped all year and an undefeated record of 19-0. The Knights would also carry a target as the #1 ranked team in the state. All eyes were on the Knights and Colfax who were unfortunately placed on the same side of the bracket. It was Colax who would end the Knights season in the 2006 semis before going on to win state. Both teams would deliver, the Knights with 3-0 sweeps of Goldendale and Chelan, setting up the epic battle. The 5-set thriller still holds 1st place in the "most epic matches" category, with a close runner-up to the 2011 5-set loss to Collville. Both were incredible nail-biters that brought tears in the end but the 2007 loss to Colfax featured one of the most amazing, composure testing comebacks in state volleyball history. Down 18-24 and facing match point in the 4th set, the Knights would rally. Junior Libero Meagan Foote would take over serve and knock-off tough serve after tough serve under enormous pressure. One mistake and the season is over. Foote and her Knight teammates would battle back to tie it and trade-off points in an incredible see-saw battle that culminated with a Knights win, 30-28. The 5th set was just as incredible and featured a Colfax comeback that would earn their victory and eventual state title. The Knights were up 12-9 in the 5th but Colfax battled back to tie it, side-out volleyball, and a Knights loss and another incredible 5th-set score of 17-19! Remarkably, the Knights had zero time to hang their heads, as a consolation 3rd place match vs Chewelah had to be played in less than an hour. Notably, with wet eyes, the Knights would set a standard by playing through the dissappointment by winning the match and a 3rd place trophy.

The ball doesn't always bounce your way and sometimes you have to be satisfied with the dignity of your efforts. While crushing, the 2007 Knights would set many new standards, without which, there are no state titles in 2008 and 2009. 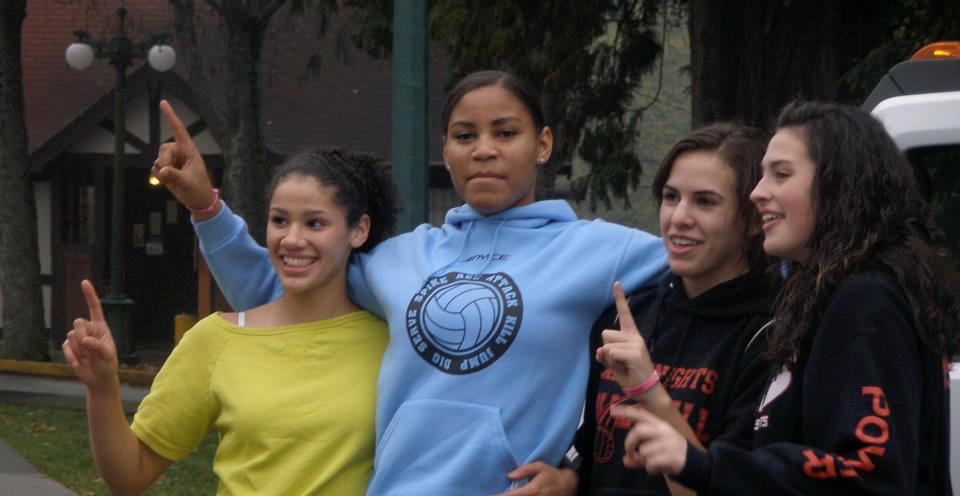